THIS BRITISH ACCENT COURSE IS YOUR

about the way you speak

that your accent is not perfect

for your presentation skills

"This English pronunciation course gives you everything you need to learn - and maintain - excellent speech".

“Why Did I Create The Voice & Speech Toolkit? “

Hi! I’m Glen McCready – TheSpeechCoach.pro. For over 20 years I have worked as a professional actor, presenter and voiceover artist.

In recent years, more and more people have been asking me to coach them, because they feel the way they speak has been holding them back and limiting their chances, both professionally and personally.

Those people include lawyers, doctors, TV broadcasters, actors, executives, public speakers – people from all over the world, of all nationalities – who, just like you, simply wanted to make their spoken English as good and effective as possible.

Now it’s time to share my knowledge online. The Voice & Speech Toolkit is a course of 38 easy-to-follow video lessons that you keep forever – take a look now, and try it for free!

Glen McCready is one of the 3 experts who recorded the sound files for my Longman Pronunciation Dictionary. It includes a sound file of every entry in the dictionary – nearly 100,000 words and phrases.

Glen demonstrated that he had been well trained phonetically, and could follow the phonetic transcriptions accurately. He was fully competent to achieve what we needed; his skills as a voice teacher are underpinned by a solid training in phonetics.

TIP : If you are searching for a British accent dictionary, you can find the Longman Pronunciation Dictionary here on Amazon

I am Dharmendra Sheth from Surat, Gujarat, India. I have studied, and also taught, phonetics and phonology to non-native learners of English at a local university here.

However, as a non-native user of English, I am always a little unsure about the finer aspects of pronunciation. Luckily I came across your course. I have been learning English pronunciation via your course for more than a month now, and I am about to complete it. I must say your course is immensely helpful to me. It has excellent audio and video quality and ample practice material.

You don't know how much your course has helped me. By just listening to you and copying, my vocal problem has been solved to a great extent. Now I can speak for hours without straining my vocal chords. Plus my English "sounds" English, according to my friends and colleagues!

I'm from North Pole, Alaska.  I registered for thespeechcoach.pro webinars so that I could improve my British accent for future voice acting gigs and local stage productions.  I have enjoyed the lessons very much!  I include them as part of my vocal warm-ups, when I'm preparing for a stage role or a British character in a novel.  I'm currently narrating the classic British novel "Jane Eyre," by Charlotte Bronte, and I finally have the confidence to record the entire story, using a British accent.  I have recommended this course to all my actor friends.  Thanks, Mr. McCready, for making these webinars available to us lazy-speaking Americans! 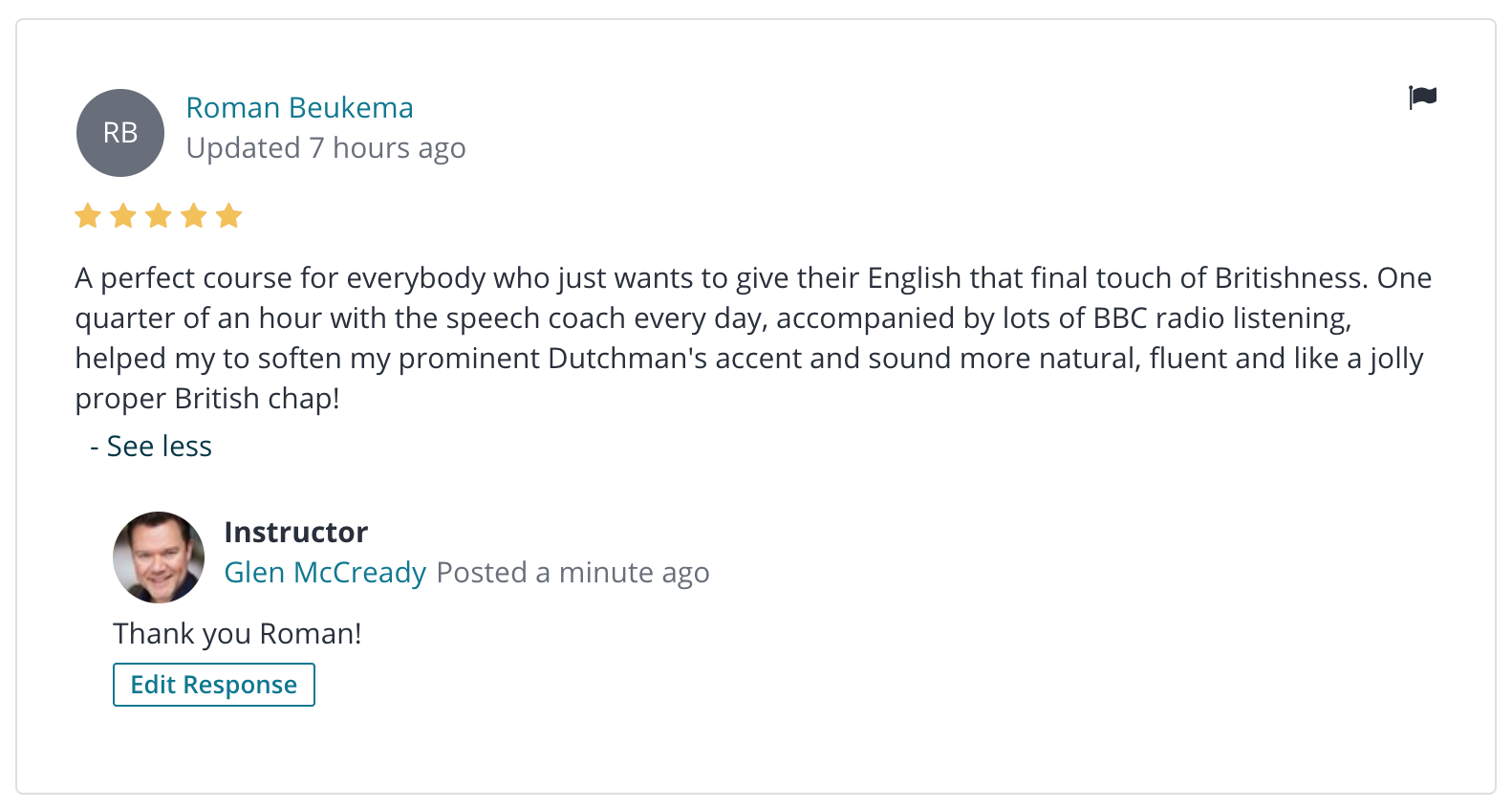 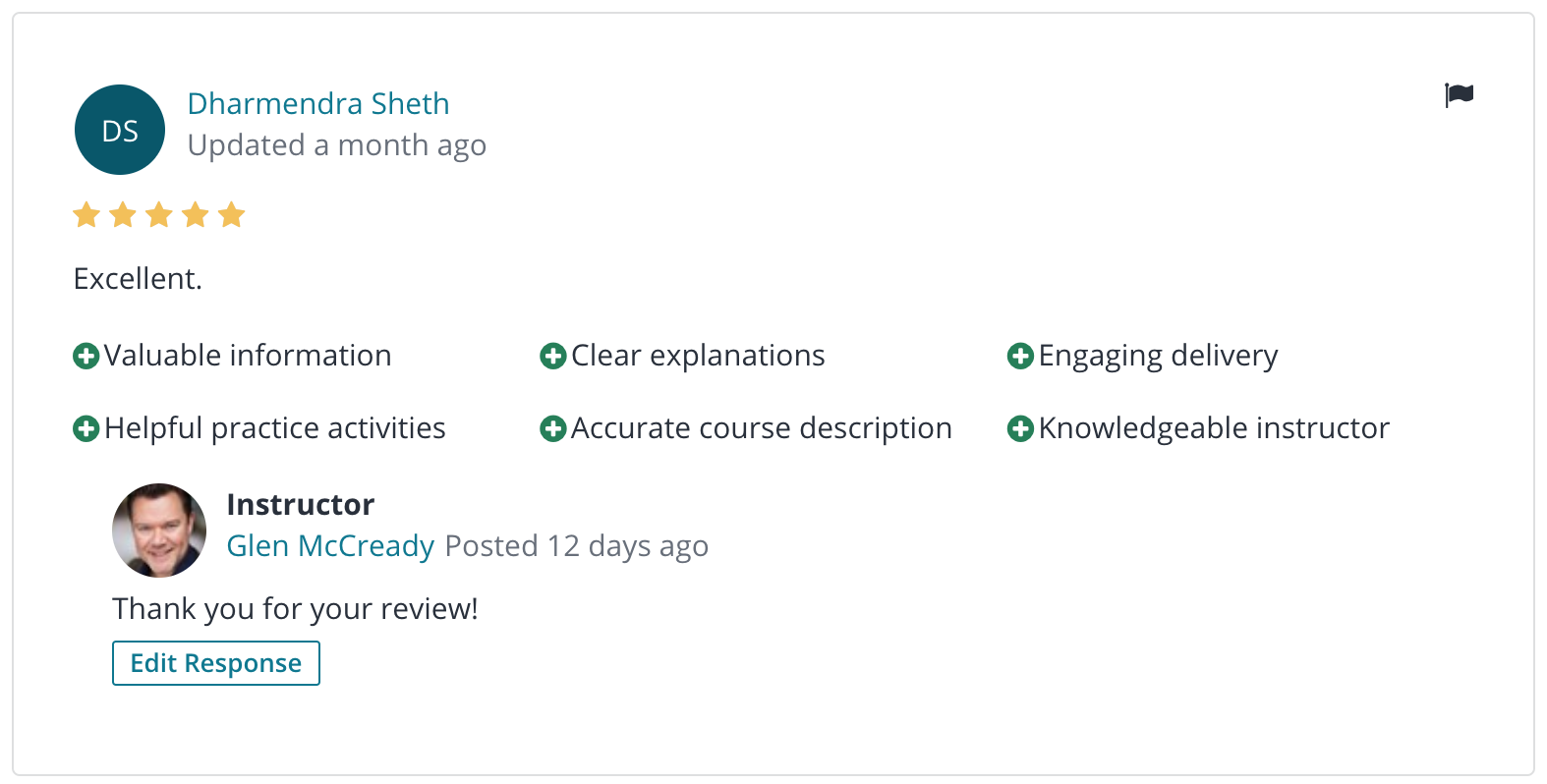 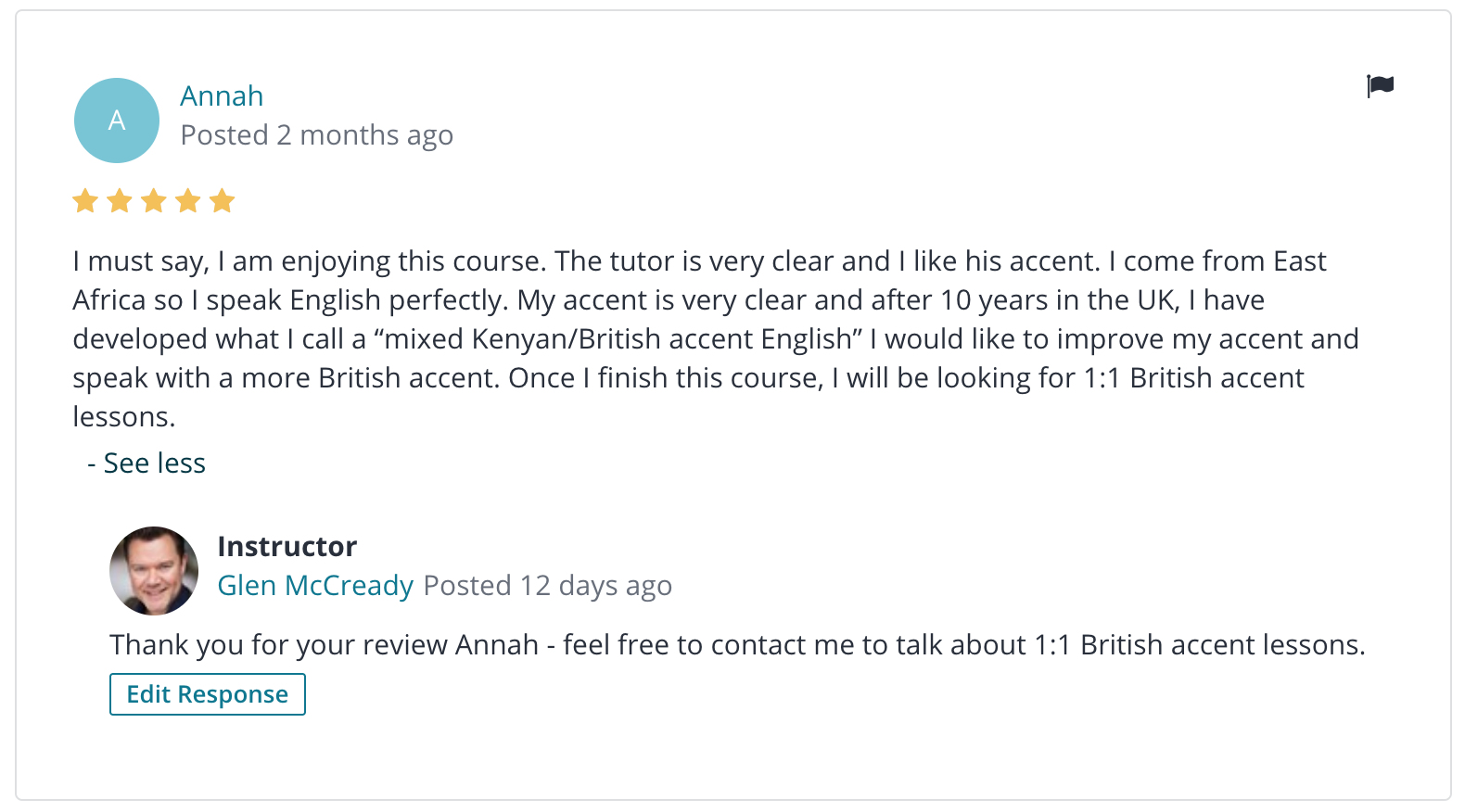 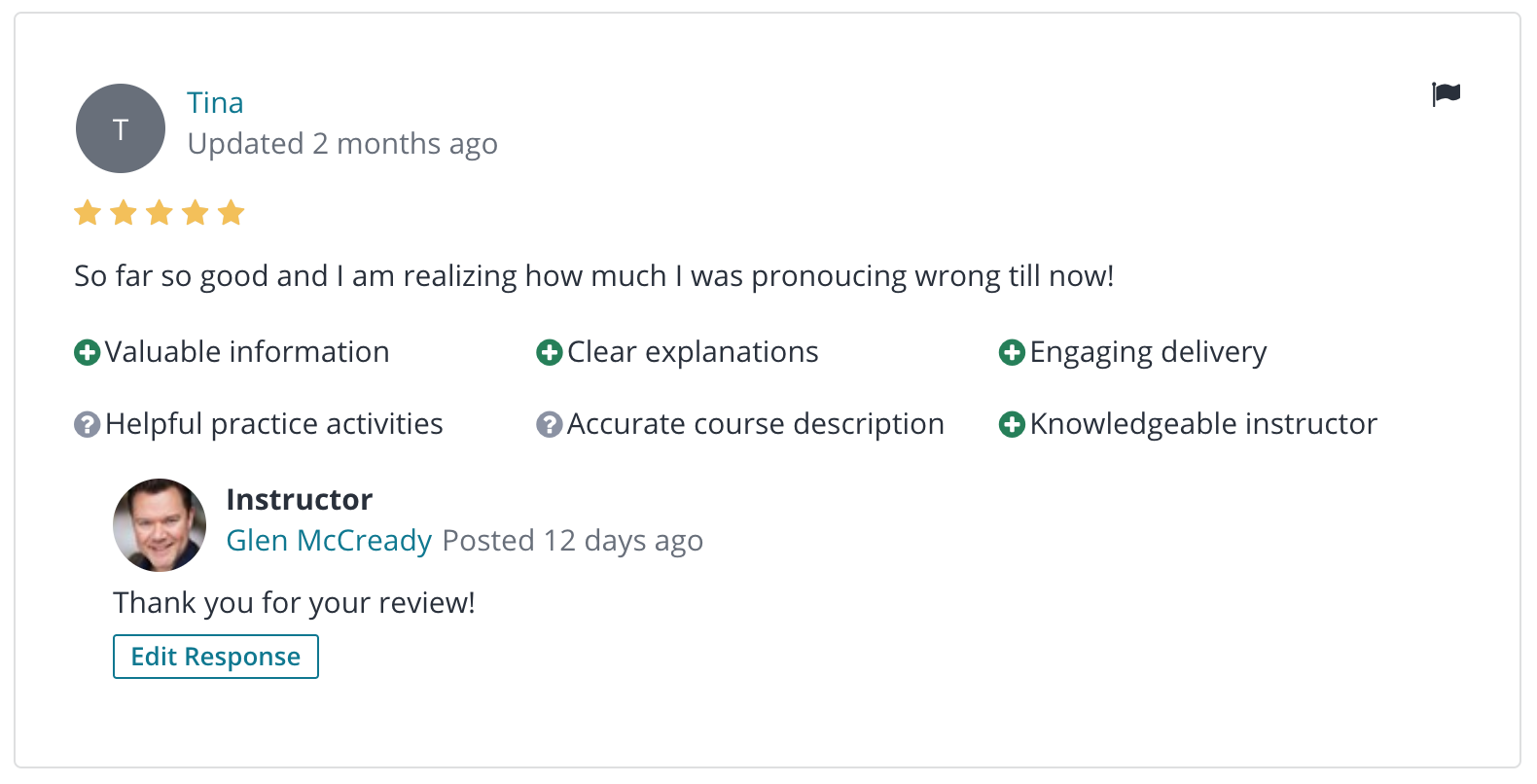 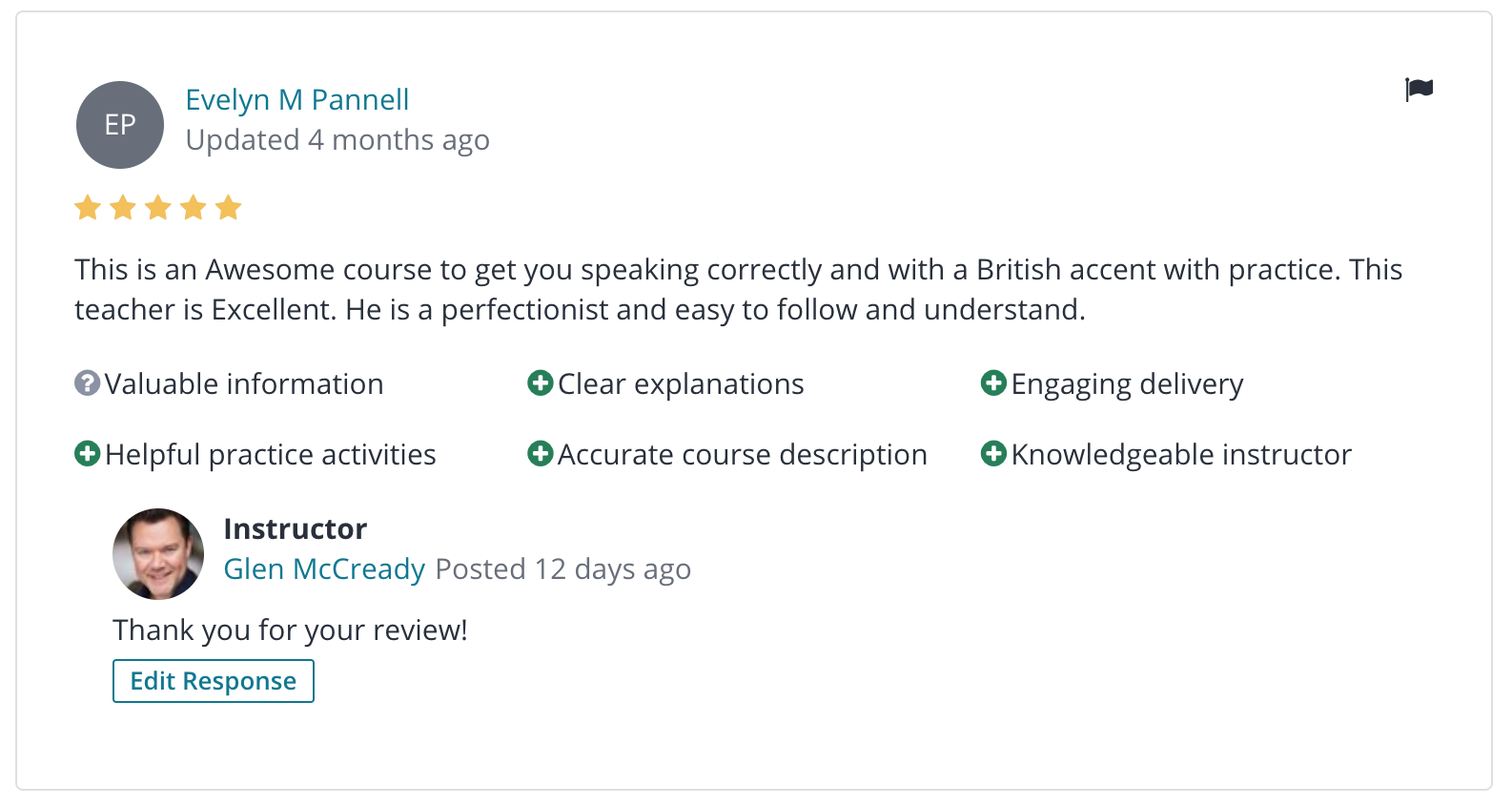 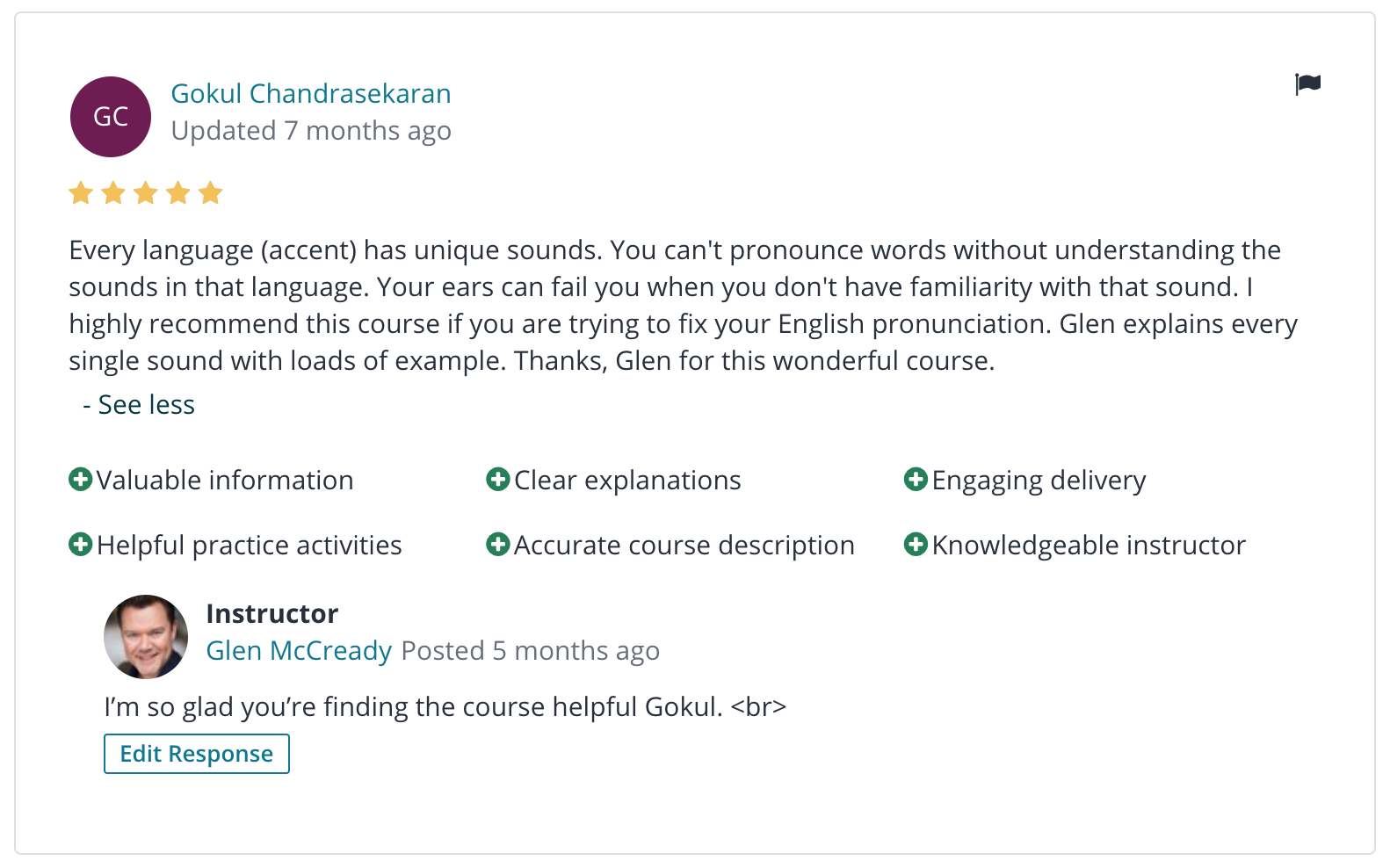 Boosting your confidence for public speaking

Making a great best man speech... but you're terrified!

English accents for American and other non-UK actors